Did any lander or rover photograph the sun rising or setting during a Martian dust storm?

Mars Pathfinder photographed the setting sun, and University of Arizona Mars Pathfinder Imaging Team produced color corrected images (as they would appear to the human eye) like these 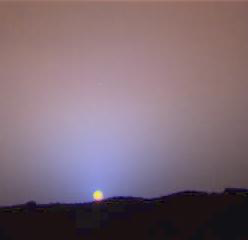 This is a close-up of the sunset on Sol 24. The red sky in the background and the blue around the Sun are approximately as they would appear to the human eye. The color of the Sun itself is not right — the Sun was over exposed in each of the 3 color images that were used to make this picture.The true color of the Sun itself may be near white or slightly bluish

This image of the Martian sunset from Sol 24 shows much more color variation than had previously been seen. The blue color near the Sun is not caused by clouds of water ice, but by the Martian dust itself. The dust in the atmosphere absorbs blue light, giving the sky its red color, but it also scatters some of the blue light into the area just around the Sun because of its size. The blue color only becomes apparent near sunrise and sunset, when the light has to pass through the largest amount of dust.

Were any photographs taken of the sunrise or sunset during a Martian dust storm, in particular, that are color corrected versions, as they would appear to the human eye, of those images?

Are you looking for the answer?
Original Question and Possible Answers can be found on `http://space.stackexchange.com`
Question Tags: dust-storm, images, mars, naked-eye